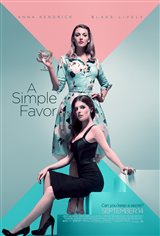 Stephanie (Anna Kendrick) is a blogger in a small town who happens to be a single mother. Her best friend, stylish and sophisticated executive Emily (Blake Lively), goes missing shortly after asking Stephanie for a favor. Emily's husband Sean (Henry Golding) has no idea where she is. Stephanie writes about the disappearance, asking her readers for help, and put fliers up all over town.

As she looks into what happened, Stephanie begins to realize she really didn't know Emily very well at all.

Based on the novel of the same name by Darcey Bell.