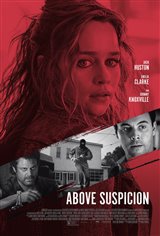 Mark Putnam (Jack Huston) is a newly married FBI agent assigned to work in a small town in Kentucky, where he meets Susan Smith (Emilia Clarke). While working another case trying to catch a local bank robber, Mark turns to Susan, asking her for information. Working with the Feds is a big risk for someone like Susan, so Mark agrees to pay her big money for her to act as his star informant. They are successful in catching the robber, leading to Mark being praised at work and at home.

In light of their success, Susan sees Mark as an escape from her dangerous lifestyle, resulting in an illicit affair between the two. Things start to take a turn for the worse for the two of them when their relationship results in a scandal that threatens Mark's job, endangering all his investigations, as well as his relationship with his wife and the safety of both of their lives.