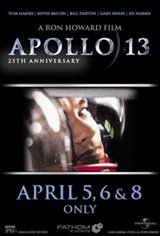 It's been 50 years since the Apollo 13 mission, and 25 years since the premiere of the stunning dramatic rendition that brought the historic flight and its crew to life for a new generation. Nominated for nine Academy Awards®, including Best Picture, the real-life space flight that gripped the nation and changed the world is returning to theatres for a special in theatre event in honor of the anniversary of both the movie and the mission.

Tom Hanks, Kevin Bacon and Bill Paxton star as three astronauts who prepare for a mission to the moon in 1970. They undergo extensive training right up until their April 11 launch date.

The world watches as the team makes its way to the moon, but three days into the mission, a tank explodes inside the rocket and forces the team to abort. Now, their only mission is to make it safely back to Earth.