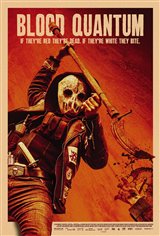 Blood Quantum is a film that follows the Mi’gmaq community of Red Crow. Red Crow Reservation sheriff Traylor (Michael Greyeyes) and his ex-wife Joss (Elle-Máijá Tailfeathers) have got their hands full dealing with their teenage son Joseph (Forrest Goodluck), who recently got his underaged girlfriend Charlie (Olive Scriven) pregnant.

Suddenly, their lives take a very different turn when flesh-eating zombies begin to attack the residents. It turns out that the Red Crow tribespeople are immune to the zombie virus. They have to now decide whether to allow the non-Indigenous people into the reserve who are arriving to take shelter.

The film follows the community before, during and after the zombie outbreak.