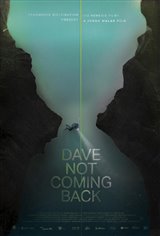 Dave Not Coming Back

In October 2004, two cave divers and longtime friends, Don and Dave, went on a dive in Boesmansgat, a mythical cave in South Africa. Dave was breaking a world record for depth. Although they knew that the body of diver Deon Drayer had been there since 1994, they didn't expect to find it.

It took Dave 17 minutes to reach the bottom and once there, against all odds, he found the body. They called the parents of the missing diver, enrolled eight fellow divers, and hired a cameraman to document the dive.