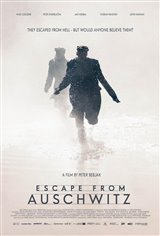 In 1944, no one realized the extent of the crimes perpetrated within the walls of concentration camps. Scandalized by this ignorance, two Czechoslovakian Jews—Rudolf Vrba and Alfred Wetzler—imprisoned for two years at Auschwitz, set out to escape and reveal to the world the truth about what is really happening in the Nazi camps. Their flight is victorious, but their long and perilous adventure has only just begun—because very few people believe their story of the terrible atrocities they have experienced and witnessed.