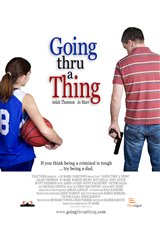 Going Thru a Thing

When Samantha’s “Sammy” (Aelah Thomson) high school teachers go on strike, her basketball team is left without a coach. Her father Charlie (Jo Marr) is a career criminal without much of a career. When he is coerced into taking up the vacant coaching spot, he sees it as an opportunity to bond with his daughter, and satisfy the judge in an upcoming petty theft case. Although he knows nothing of the game, Sammy ignites in him a hard work ethic and team spirit. When he is asked a favor that would further his career but hurt his daughter’s chance at the championships, he is forced to take a hard look in the mirror and make a life-changing decision.

Canadian Connection: A Canadian production filmed in Ottawa, Ontario with a Canadian cast and crew.;