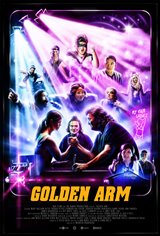 When Danny (Betsy Sodaro) breaks her arm in a wrestling match against Brenda "The Bonecrusher" (Olivia Stambouliah), she ropes her best friend Melanie (Mary Holland) into taking her place in the Women's Arm Wrestling Championship, as she has a natural strength that makes her perfect to dominate the sport of arm wrestling.

Melanie runs a bakery by herself, and the customers don't even respect her. She is in desperate need of cash and a change of pace, as she is also dealing with her recent divorce. With Danny wanting to get back at Brenda for breaking her arm and Melanie in desperate need of money, the two friends come together, with their sights set on winning the Women's Arm Wrestling Championship and earning the $15,000 grand prize. With the help of Danny, and legendary ladies arm wrestling coach, Big Sexy (Dot-Marie Jones), Melanie begins her training to win the tournament and take down Brenda, dropping the whisks and scones to shed her "nice-girl" attitude and become Golden Arm.