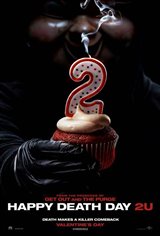 A sequel to the 2017 film Happy Death Day, written and directed by Christopher Landon, son of Michael Landon and produced by Blumhouse Productions.

Tree Gelbman (Jessica Rothe) inadvertently re-enters the time loop and discovers that Lori Spengler (Ruby Modine), the original killer, has been murdered. With not only herself, but her friends in danger this time around, Tree must find out the identity of the new killer and face the threats in order to uncover their identity and break free of the time loop once and for all.