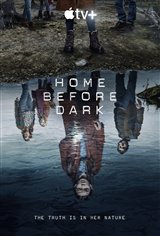 Nine-year-old Hilde Lisko (Brooklynn Prince) travels with her family from their home in Brooklyn to the small lakeside town of Erie Harbor in the state of Washington, where her father, Matt (Jim Sturgess), grew up. However, when they arrive, some people don't seem too happy to see her dad.

Hilde, who considers herself to be an investigative journalist, soon discovers that in 1988, when her father was young, his best friend Richie (Kiefer O'Reilly), who also happened to be the mayor's son, was kidnapped right in front of him. Determined to solve the cold case, Hilde heads for the police station to look at the files. However, her investigation soon gets dangerous.

In Season 2, Hilde has another dangerous mystery to uncover, while still trying to determine what happened to Richie Fife.

Inspired by the real life of nine-year-old journalist Hilde Lysiak.