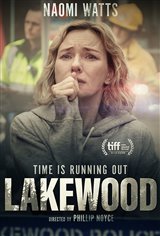 Amy Carr (Naomi Watts) goes out for a restorative morning run when a friend calls her with terrifying news: the authorities are in pursuit of an active shooter, and her teenage son, Noah, may be caught in the middle.

Deep within a network of forest paths surrounding her home, miles from town and nearly overwhelmed by panic, Amy refuses to succumb to hopelessness. Using only her cell phone, she will draw upon every resource she can think of to ensure that her son survives the attack.