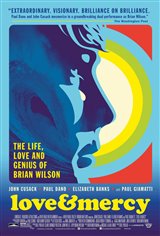 As the leader and co-founder of one of the most influential groups in American music history, the Beach Boys, Brian Wilson (Paul Dano) struggles with mental illness from an early age. Beaten by an abusive father and enduring criticism from his cousin and fellow band member, Mike Love, he nonetheless manages to create hit songs throughout the '60s and '70s.

The films cuts back and forth from the past to the future, in which Brian Wilson (John Cusack) meets an attractive Cadillac salesperson, Melinda (Elizabeth Banks), but their relationship meets with serious problems as it gets more serious, due to the controlling manner of Brian's caretaker/manager/psychologist, Dr. Gene Landy (Paul Giamatti). It becomes clear to Melinda that Landy is overmedicating Brian while emotionally abusing him.

Brian is clearly afraid of Landy, so she decides to figure out a way to get Brian free of this manipulative and exploitive doctor, so he can finally get the medical help he needs.