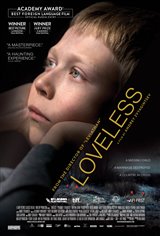 After many years of marriage, Zhenya (Maryana Spivak) and Boris (Aleksey Rozin) are sick of each other and just want to divorce. They want to move on with their lives with the new partners they've already found. Boris has a girlfriend who's already pregnant with their first child and and Zhenya is with a well-to-do man with a grownup daughter.

All that stands in their way is their 12-year-old son Alyosha (Matvey Novikov), who was the reason they married, after Zhenya became unexpectedly pregnant. Neither parent wants custody of the boy. After overhearing yet another one of their vicious fights, in which Zhenya admits she never loved the boy and never loved her husband, we see Alyosha behind a closed door, in tears. He's left alone that night and when his mother comes home, she doesn't check on him. In the morning, when Zhenya goes to wake him up, Alyosha is nowhere to be found.

A city-wide search is organized when the boy doesn't show up for school two days in a row, but days pass without any news of his whereabouts.