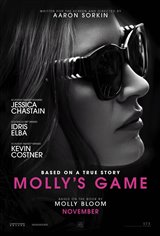 Based on the true story of Molly Bloom (Jessica Chastain), an Olympic-class skier who ran the world's most exclusive high-stakes poker game for a decade before being arrested in the middle of the night by 17 FBI agents. She is charged with operating an illegal gambling business.

She immediately contacts her defense lawyer Charlie Jaffey (Idris Elba). Her players included Hollywood royalty, sports stars and business titans.  She also manages to get the attention of the Russian mob. She is offered complete immunity in exchange for hard drives that will bring down the mob. However, Molly has a different plan and isn't willing to give up.