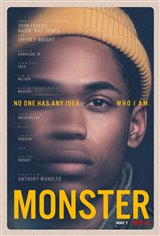 Steve Harmon (Kelvin Harrison Jr.), a 17-year-old honor student from Harlem and aspiring filmmaker, is living his best life. He gets good grades in school, has a loving family and also a beautiful and supportive girlfriend. He spends his days exploring the streets of Harlem, taking street level photos and on-the-fly footage with people in his community.

However, his world is turned upside down when he unfortunately gets caught in the middle of a robbery in a bodega that results in a murder, with law enforcement assuming him to be an accomplice. Now standing trial for acting as a lookout during the lethal armed robbery, Steve is seen as just another young black criminal, painted as a felon, a thug, and a monster. Possibly facing a lifetime sentence, Steve now enters a complex legal battle, and despite the odds, fights for his freedom against the system that failed him in the first place.

Based on the award-winning novel by Walter Dean Myers.