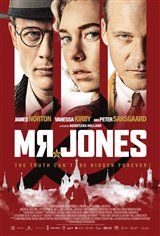 Ambitious Welsh journalist Gareth Jones (James Norton) travels to Moscow in an effort to interview Stalin on the Soviet Union’s successful economic expansion. But Mr. Jones receives a tip from an informant about an international conspiracy.

Jones unofficially travels to Ukraine, where he uncovers the truth behind Stalin's plan: a genocidal famine, killing millions of people. Jones must now decide whether to keep quiet about this dark secret or risk his life to expose the truth.