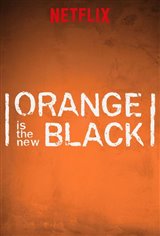 Orange is the New Black (Netflix)

This Netflix original series tells the story of Piper Chapman (Taylor Schilling). In season one, her life is abruptly put on hold because of a former fling with an international drug smuggler, Alex Vause (Laura Prepon). In the height of their passionate romance, a young and lovestruck Piper transported drug money to her girlfriend, and now she's paying the price for her crime by serving a 15-month sentence in a women's federal prison.

Scared and alone, Piper has to leave everything behind temporarily, including her fiancé, writer Larry Bloom (Jason Biggs). Piper's first days in jail are tough: she meets women from different walks of life, including secret admirer Crazy Eyes, the intimidating Red and mysterious roommate Miss Claudette.

As the season evolves, Piper faces many challenges: the struggle to keep her relationship alive, the hidden agendas and secrets that are kept by inmates and officers alike, and ironically, her ex, who landed her in prison in the first place. Piper and Alex's jail stint forces them to interact, which leads to surprising results and proves to be the biggest test of all for Piper's engagement.

The second season of "Orange is the New Black" begins with Piper facing the consequences of her actions. Morello (Yael Stone) gets her heart broken while Larry (Jason Biggs) makes changes to his life, and Piper starts a prison newsletter.

Season 3 begins with Caputo's (Nick Sandow) new regime in place which is a new experience for the women. This season deals with disillusioned staff, a bed bug infestation which causes tempers to flare, Daya (Dascha Polanco) goes into labour and much more.

Season 4 delves into the racial and economic tensions that run rampant in the halls of Litchfield. Overrun with new inmates and overseen by inexperienced guards, the prison undergoes an unprecedented culture war.

Season 5 will pick up right where season 4 left off. A riot sparks after a key inmate's death and things quickly escalate when the inmates gain control of the prison.