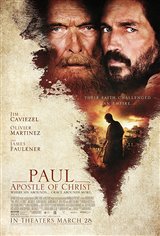 The story of Paul (James Faulkner), who was converted to Christianity while traveling on the road from Jerusalem to Damascus on a mission to persecute and arrest Christians, when the resurrected Jesus appeared to him and he was struck blind for three days.

When Paul is captured by Roman Emperor Nero, who wants to get rid of all Christians, he's held in the dark, bleak Mamertine prison in Rome, where he's endlessly tortured. His friend Luke (Jim Caviezel) risks his life to venture into Rome to visit Paul, who has been sentenced to death.