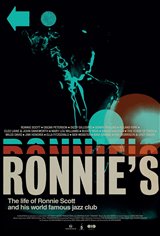 In 1959, saxophonist Ronnie Scott opened the door to a small basement club in London's Soho. As part of the burgeoning modern jazz movement, he and fellow saxophonist Pete King had dreamt of opening a club modelled on the swinging scene of New York's 52nd Street.

From its humble beginnings sixty years ago, Ronnie Scott's would become the cornerstone of the UK jazz scene and one of the most famous jazz clubs in the world.Ronnie Scott was beloved by many, from the great and famous who frequented his club, to the many hard up musicians who were often helped by his warmth and generous spirit.

However, Ronnie was as complex and colourful as the music played on his stage. In private Ronnie battled with depression and when his untimely death occurred in 1996 it left the jazz community bereft of a respected and favourite leader.