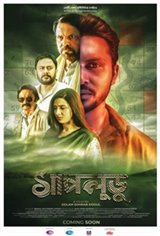 Irfan has been the moral political guardian to Arman the way Ahsan has been to him. Then why does a series of unfortunate events- female trafficking, drug smuggling, disappearing of a foreign journalist, a bomb blast- occur in their small town of Thanchi? Who are they that prey on the aborigines at night?

Who are they, who roam around with blood-spattered faces and weapons in hand during Vaisavi? Why does Arman continuously end up as the scapegoat? Where does someone's gains lie in Arman's death?