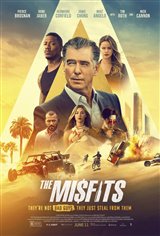 A band of modern-day Robin Hoods known as "The Misfits," including Ringo (Nick Cannon), Violet (Jamie Chung) and Wick (Mike Angelo), team up with "The Prince" (Rami Jaber) to break Richard Pace (Pierce Brosnan) out of prison. However, villianous prison owner Werner Schultz (Tim Roth) vows to recapture him. Especially when he finds out the criminals are after millions in gold bars stashed underneath one of the prisons he owns.

The loot is destined to help fund terrorism, and is stashed at Schultz's prison in Abu Dhabi. The benevolent criminals don't want it getting into the hands of terrorists, and plan to give it to people in need. But when Pace doesn't want to join them, because he only wants to put in effort when funds are going into his own pocket, they have a hard time getting him on board. That is, until someone unexpected shows up in Abu Dhabi.