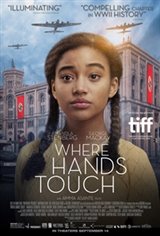 WHERE HANDS TOUCH is a coming of age story set in the most brutal of times.

Germany 1944: 15-year old Leyna (Amandla Stenberg), daughter of a white German mother and a black African father meets Lutz (George MacKay), a member of the Hitler Youth ­- compulsory for all Aryan boys since 1936. They are bound by the realization of the horrors being committed against the Jews, as Leyna tries to avoid the fate of black Germans at the time. Can she find an ally in Lutz, himself battling the fate laid before him?