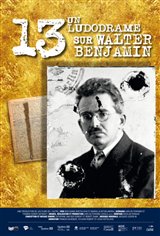 13, a Ludodrama about Walter Benjamin

In 1933, Walter Benjamin, a philosopher and Jewish art historian, moves to Paris to flee the Nazi dictatorship. The lonely intellectual spends his days at the National Library. He still keeps in touch with a small circle of friends, including Bertold Brecht, whom he visits twice at his refuge in Denmark.

In May 1940, when Germany invades France, Benjamin is interned in a voluntary labor camp. Released a few weeks later, he leaves Paris in the direction of Lourdes, then Marseille. In September he’s arrested in Portbou, Catalonia. Rather than be turned over to the Nazis, he ends his life.