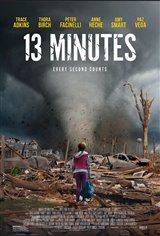 Out in the country, generational farmers Rick (Trace Adkins) and Tammy (Anne Heche) are struggling to make ends meet. Their hope of having their only son Luke (Will Peltz) take over the farm is crumbling. What they don’t know is that Luke, 27, is gay but hasn’t come out yet because he worries about the reaction his conservative parents may have.

In town, teenage hairstylist Maddy (Sofia Vassilieva) has just found out she’s pregnant. The father is a traveling salesman twice her age who doesn’t want her to keep the baby.

Over at the roadside motel, ambitious Mexican chambermaid Ana (Paz Vega) is chasing the American dream. She’s about to buy a house and marry her fiancé Carlos (Yancey Arias), an illegal immigrant who made the dangerous border crossing to be with her.

Kim (Amy Smart) the Regional Emergency Manager, has a responsibility to be prepared for a worst-case scenario and to make sure the people in her community are ready to respond to weather warnings. On days like this, Kim’s meteorologist husband Brad (Peter Facinelli) is also caught up at work, so Kim has to make sure her young, hearing-impaired daughter Peyton is looked after.

As the weather gets hotter and more humid over the course of the day, it becomes clear that a massive storm is on the way. When the sirens go off, residents will have 13 minutes to get to shelter. Paths will cross. Lives will be irreversibly changed.