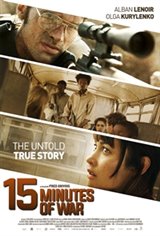 Djibouti, February 1976. A small separatist group, which is demanding the annexation of the French colony to neighboring Somalia, takes 31 children and their teacher hostage. Dispatched to the scene, military Captain André Gerval deploys his elite commando team and prepares to assault. Eager to do battle with the heavily armed terrorists as soon as possible, however, the military must wait for the approval of the French authorities, who favor a crisis-free outcome without bloodshed.