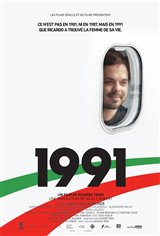 Ricardo Trogi, 21, is studying screenwriting at the University of Quebec in Montreal, but he finds himself constantly thinking about Marie-Eve Bernard, whom he secretly considers the woman of his dreams.

When she goes to study Italian in Umbria during the summer, Ricardo ignores his hysterical mother’s warnings and joins Marie-Eve. But as soon as he sets foot in the country where his father was born, Ricardo experiences a variety of misadventures that delay his arrival in Perugia, where Marie-Eve is waiting for him.

And when he finally gets there, he finds out he has to share an apartment with a Burkinabe Don Juan, while Marie-Eve shares hers with a Spanish potter.