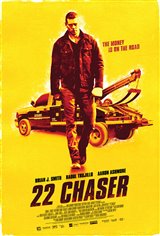 Ontario tow truck driver Ben (Brian J. Smith) is a new father with a baby son, but he's struggling to provide for his family. Having recently moved from a small town to the big city, he's one of Toronto's last ethical tow truck drivers.

However, that changes when he trades his personal values for financial success and stability for his family as he switches from towing illegally parked cars to chasing road accidents in his rig.

Canadian Connection: A Canadian production filmed in Toronto and Oshawa, Ontario with a mostly Canadian cast and crew.;