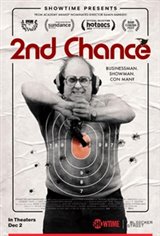 In 1969 a bankrupt pizzeria owner, Richard Davis, invented the modern-day bulletproof vest. To prove that it worked, he shot himself - point blank - 192 times. Davis then launched Second Chance, which became one of the largest body armor companies in the world.

Charming and brash, he directed sensational marketing films, earning him celebrity status among police and gun owners across the country. But the death of a police officer wearing a Second Chance vest catalyzes Davis' fall, and reveals a man full of contradictions cultivated over decades of reckless behavior.

Equally as questionable as he was captivating, Davis saved thousands of lives while endangering exponentially more.