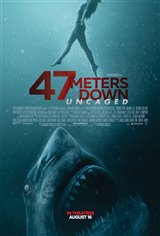 Mia's marine-archaeologist father, Grant (John Corbett), gives her and three of her friends (Corinne Foxx, Sistine Stallone, Brianne Tju) tickets to see sharks in their natural habitats. Although Mia (Sophie Nélisse) is keen to go, her friends talk her out of it, saying the experience is for tourists. Instead, they head off to a beautiful reservoir in the middle of a forest, where the ruins of a Mayan city lie far beneath in caves. They put on scuba gear and dive deep down, where in one cave they find numerous skeletons.

Unfortunately, the decaying columns come crashing down while the girls are under the water. When they resurface, they realize that there's a shark with them in the catacombs of the caves.