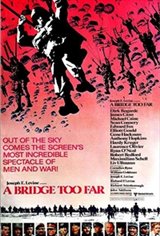 A Bridge Too Far

It's late 1944, and the Allied armies are confident they'll win the World War II and be home in time for Christmas. What's needed, says British general Bernard Law Montgomery, is a knockout punch, a bold strike through Holland, where German troops are spread thin, that will put the Allies into Germany.

The plan also has one critical flaw: Instead of a smattering of German soldiers, the area around Arnhem is loaded with crack SS troops. Disaster ensues. Based on a book by historian Cornelius Ryan, A Bridge Too Far is reminiscent of another movie based on a Ryan book, The Longest Day.

Like that movie, it is loaded with more than 15 international stars, including Sir Laurence Olivier, Robert Redford, Hardy Krueger, Gene Hackman, Maximilian Schell, and Liv Ullman.