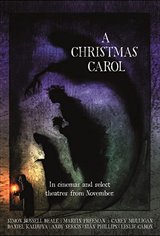 A Victorian family prepares a toy-theatre for their annual performance of A Christmas Carol. The audience enters the imagination of one of the children and quickly the cardboard stage transforms to reveal a magical world containing real dancers and stylized sets. The classic tale unfolds on screen in a rich tapestry of highly absorbing, haunting, and theatrical drama with characters portrayed by dancers and voiced by an eclectic cast of some of the world’s most recognizable actors.