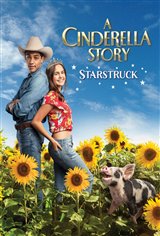 Small-town farm girl Finley Tremaine (Bailee Madison) dreams of being an actor, but she's stuck on the farm her father left behind, along with her stepmother (April Telek) and stepsiblings, Saffron (Lillian Doucet-Roche) and Kale (Richard Harmon). Finley does all the chores around the farm and even makes all the meals.

When a Hollywood film crew arrives in her sleepy town and announces they're holding auditions for their new movie musical starring heartthrob Jackson Stone (Michael Evans Behling), Finley is determined to land a role. Unfortunately, her performance goes south when her pet pig gest loose.

Unwilling to give up her only chance, Finley, disguised as cowboy "Huck," auditions again and finally gets hr big break. But with her family also on the set, she struggles to keep her identity a secret.