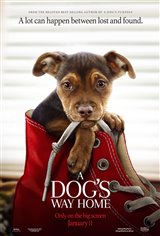 When aspiring medical student Lucas Ray (Jonah Hauer-King) finds a stray puppy, he immediately falls in love with her. He brings her home to the house where he lives with his mother (Ashley Judd). His mother also quickly falls in love with the puppy, whom Lucas names Bella (voice of Bryce Dallas Howard).

As she grows bigger, Bella and Lucas form the closest of bonds. But when an animal control officer tells Lucas that because Bella is a pit bull, she’s not legally allowed to be in Denver, Lucas temporarily sends Bella to live with his girlfriend’s family 400 miles away. Bella misses Lucas so much that she runs away. She sets off across the dangerous Colorado wilderness to return home.

Based on the book of the same name by W. Bruce Cameron and adapted into a screenplay by Cameron and his wife, Cathryn Michon.