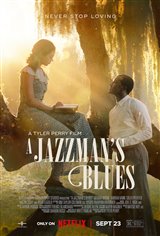 In 1947 Georgia, Bayou (Joshua Boone) meets Leanne (Solea Pfieffer). They fall in love, but Leanne's relatives forbid the relationship. When they meet again years later, Bayou has become a song-and-dance sensation and Leanne has married another man — and is passing as white. Their desire for each other reignited, they conspire to escape together, but they can't shake dangerous secrets from their past.

In 1987, a stack of letters is delivered to a state attorney general, possible evidence in the long-unsolved murder case of Bayou.