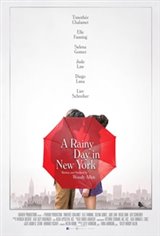 A Rainy Day In New York

When Ashleigh scores an interview in New York City with big time film director Roland Pollard (Liev Schreiber), Gatsby decides to turn the trip into a special weekend funded by his poker winnings. He anticipates the two of them enjoying fancy meals, going to museums, staying at upscale hotels and having evening cocktails at the Carlyle.

However, when Ashleigh goes to the interview, she discovers that Roland is having an existential crisis. He takes her to a private screening of his new film but he's so disappointed with the movie that he leaves. Ashleigh and the film’s screenwriter, Ted Davidoff (Jude Law), try to track him down. Along the way, they bump into famous actor Francisco Vega (Diego Luna).

With his weekend ruined, Gatsby wanders around Manhattan and winds up playing a role in student film, in which he has to kiss Chan (Selena Gomez), the little sister of one of his old girlfriends. Finally, Gatsby is coerced into attending his socialite mother's big party, which he was trying to avoid. However, since he can't find Ashleigh, Gatsby hires a sex worker to pose as his girlfriend.