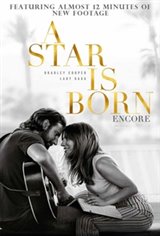 A Star Is Born: Encore Version

Country music star Jackson Maine (Bradley Cooper) stops alone at a bar after a concert, where he quickly becomes mesmerized by a young singer named Ally (Lady Gaga), who's doing a rendition of "La Vie en Rose." He goes backstage to meet her, and they wind up talking for hours. He discovers that she writes songs as well, but hasn't had a break, so still works at a low paying menial job to earn money.

The next day, he sends a limo to pick her up and deliver her to his next concert, where he invites her onstage. She has already witnessed his drinking, but Jackson has fallen head over heels for Ally and wants her to join him on his concert tour. Attracted to him, and by the spotlight, she reluctantly agrees, and as she takes the stage alongside him, she gains recognition. However, Jackson faces demons from his childhood and when he combines drugs with alcohol, it threatens his future as a superstar – and as a human being.