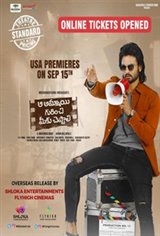 Naveen is a highly sought-after director who believes that the audiences are brainless sheep who deserve to be fed low-quality fodder. While preparing for his next feature, Naveen stumbles upon some footage from a long-abandoned film. Can he convince Alekhya to act in his film?