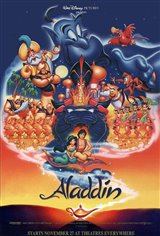 After a sultan (Douglas Seale) gives his daughter Jasmine (Linda Larkin) three days to find a husband, she escapes the palace and encounters the street-savvy urchin Aladdin (Scott Weinger), who charms his way into her heart.

When the sultan's Vizier, Jafar (Jonathan Freeman), weaves a spell so that he may marry Jasmine and become sultan himself, Aladdin discovers the Genie's lamp in a cave, rubs it, and sets the mystical entity free, leading the Genie (Robin Williams) to pledge his undying loyalty to the youth. Aladdin begins his quest to defeat Jafar and win the hand of the princess, with the Genie's help.