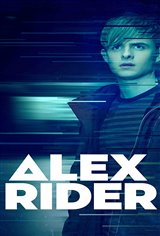 Based on the best-selling book franchise, Alex Rider, the series follows Alex (Otto Farrant), a London-based teenager who has been trained since childhood to become a spy, without him being aware of it.

When Alex is tasked into looking into the death of his uncle and the link to the assassination of two high-profile billionaires, he goes undercover in a remote boarding school called Point Blanc.