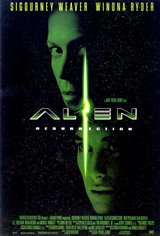 The fourth film in the Alien series, directed by Jean-Pierre Jeunet (Delicatessen, The City of Lost Children) at a cost of 70 million dollars, takes place aboard an immense ship, the Auriga, where General Perez (Dan Hedaya) heads a staff of seven science officers and 42 enlisted, all employed by United Systems Military (replacing the Company of the earlier films).

The time is 200 years after the events of Alien 3. Scientists researching the aliens need hosts, and they rely on space mercenaries who make spacecraft raids to acquire bodies. The research requires an Alien Queen specimen, so Ellen Ripley (Sigourney Weaver) has been cloned from preserved blood samples.

The scientific team then removes the baby Alien Queen from Ripley's chest. Since the Ripley clone has alien DNA mixed into her genetic structure, she is not totally human.

Cinematography by Darius Khondji features the same ENR process he used on Seven, adding silver to the printing process to heighten contrasts, making the dark colors richer. An electric-blue tint was employed during the underwater firefight between the mercenaries and the aliens.

For the more physical aspects of her role, Ryder got in shape with six hours of daily workouts. Although all previous films in the series were shot at London's Pinewood Studios, filming of Alien Resurrection took place West Los Angeles soundstages with special effects in California and Paris.