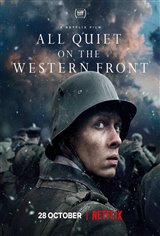 All Quiet on the Western Front (Netflix)

Paul Bäumer (Felix Kammerer), 17, lies about his age to sign up with his three friends (Aaron Hilmer, Adrian Grünewald and Albrecht Schuch) to join the German army during World War I. The boys, filled with patriotism, are thrilled about experiencing the war firsthand. But their dreams of heroism are dashed when they reach the frontline, which proves to be more like a nightmare. Their initial euphoria turns into desperation and fear as they fight for their lives in the trenches.

Based on the world renowned bestseller of the same name by Erich Maria Remarque.