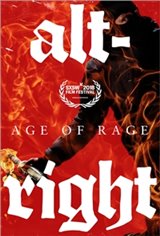 In the first year of the Trump presidency, the Alt-Right is on the rise and civil rights organizations like the shadow collective Antifa and the NAACP are fighting back.

Following such leaders as, Richard Spencer, an Alt-Right leader and Daryle Lamont Jenkins, an Anifa activist, "Alt-Right: Age of Rage" investigates both sides of the battle, in a hard-hitting expose. As tensions between Americans boil over, the battle culminates in the tragic events of Charlottesville, VA.