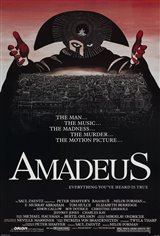 On a November night in 1823, Antonio Salieri (Abraham), once the most famous musician in Vienna, tries to take his own life. Later, in the General Infirmary, he is visited by the Hospital Chaplain, Father Vogler. While obviously contemptuous of the priest, the old man is drawn to confess to him his association with one of the greatest composers in history, Wolfgang Amadeus Mozart.

Salieri worked his way up to becoming Court Composer to Emperor Joseph II (Jones), brother of Marie Antoinette and lover, in a limited way, of music. Then in 1781 a young man arrives and changes everything forever - Wolfgang Amadeus Mozart (Hulce). Already famous as a prodigy at the age of six, Mozart was toured throughout Europe by his dominating father Leopold, showing off musical tricks for the amusement of the aristocracy. Now at age 26, the young man is far more than a performing monkey. He has become a composer, eager to show off his abilities.

Deeply impressed with Mozart's flawless work and yet disgusted by God's choice to bestow upon this childish, sniggering, rude, boy the overwhelming talent to create some of the most beautiful music man has ever heard, Salieri becomes relentless in plotting Mozart's destruction.

Based on Sir Peter Shaffer's London and Broadway hit play.