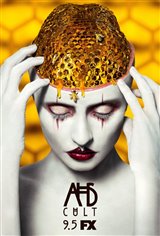 Season one, Murder House, revolves around the Harmon family, who move into a house with a history of brutal murders and demonic acts. Ben Harmon's (Dylan McDermott) adultery haunts him while his wife Vivien (Connie Britton) also experiences strange encounters, from both the living and the dead.

Season two is titled Asylum and begins in 1964 in Briarcliff Manor, a fictional mental hospital. Run by Sister Jude Martin (Jessica Lange) and Sister Mary Eunice McKee (Lily Rabe), the institution treats criminally insane patients, which include a journalist, a serial killer and an alleged murderer.

Season three, titled Coven, follows young descendants of the Salem Witch coven who are sent to Miss Robichaux's Academy in New Orleans. Cordelia Foxx (Sarah Paulson) runs the academy, trying to impress her mother, Fiona Goode (Jessica Lange). Some of the students include Zoe Benson (Taissa Farmiga), who can induce brain hemorrhaging in any man by having sex with him; Madison Montgomery (Emma Roberts), a telekinetic and former child actor; Queenie (Gabourey Sidibe), who has the power to inflict wounds on others by harming herself; and Nan (Jamie Brewer), a clairvoyant who can hear other people's thoughts.

Season five, titled Hotel, takes place in the Hotel Cortez in Los Angeles, which is now owned by fashion designer Will Drake (Cheyenne Jackson). Demons, ghosts and other creatures haunt the hotel. Some of the souls that mingle with the guests include founder James Patrick March (Evan Peters) and drug-addicted Sally (Sarah Paulson). Elizabeth/The Countess (Lady Gaga) and her lover Donovan (Matt Bomer), his mother Iris (Kathy Bates) and transgender bartender Liz Taylor (Denis O'Hare) are some of the residents often seen at the hotel. As the season unfolds, the backstories of several characters are linked to past seasons.

Roanoke, the sixth season in the series, is presented as a documentary as a group of actors reenact a couple's traumatic experience in Roanoke Island. Shelby (Lily Rabe) and Matt Miller (André Holland) are brutally assaulted in their home by The Butcher. Hired to enact them in the documentary are British actress Audrey Tindall (Sarah Paulson) and Dominic Banks (Cuba Gooding Jr.). The actors soon start to feel the presence of an unknown entity.

The latest season in the series is titled Cult and is based on the 2016 presidential election that saw billionnaire/former reality TV show host Donald Trump defeat former First Lady and Secretary of State Hillary Clinton to win the presidency.