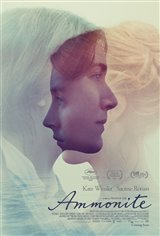 In 1840s England, acclaimed fossil hunter Mary Anning (Kate Winslet) is approached by a wealthy man who tells her about his wife, Charlotte Murchison (Saoirse Ronan). Charlotte is suffering from melancholia, and he asks Mary for help, to get her interested in life again.

He wants her to take Charlotte to the shore every day as her apprentice, to teach her about what she finds there. Although Mary isn't keen on the idea, she has to support her mother, so when he offers her a large sum of money, she can't turn it down. Charlotte doesn't seem keen on the idea either, saying she doesn’t like the water, but she soon grows an interest in Mary's work. As the two women develop a friendship, it turns into a romance that leaves Charlotte wanting to turn her back on her old life.