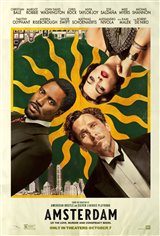 During WWI, Burt Berendsen (Christian Bale) and his best friend, Harold Woodsman (John David Washington) meet volunteer nurse Valerie Voze (Margot Robbie) when they're both injured in battle. The three become friends and form a pact to protect each other, no matter what. When they go on a trip together to Amsterdam, Valerie mysteriously disappears.

In New York in 1933, Burt, now a medical doctor, and Harold, now a lawyer, are approached by socialite Elizabeth Meekins (Taylor Swift), who asks them to investigate the suspicious death of her father, a U.S. general who died on an overseas voyage. She believes he was murdered, but before they can find out who she thinks did it, she's killed before their eyes and they're framed for her murder.