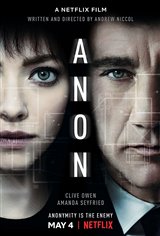 In the future where technology has left all privacy obsolete, Sal Frieland (Clive Owen) is a police detective. Everyone's lives are transparent, traceable, and recorded by the authorities. This makes it almost impossible for crime to exist.

But while working on solving a series of murders, Frieland comes across a young woman (Amanda Seyfried) with no identity and no history, who is invisible to the cops. He discovers she not only has the capability of hacking into his mind and creating things that aren't there, but she can also erase crimes — and all trace of her existence.

Canadian Connection: Filmed in Toronto, Ontario. Colm Feore, who plays Detective Charles Gattis, was raised in Canada and is a regular at the Stratford Festival. Several other cast members were born and raised in Canada.;