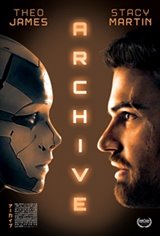 The year is 2038 and George Almore (Theo James) is stationed deep in a snow-covered forest in Japan. He is two-and-a-half years into a research project and near a breakthrough. He has been working on a true human-equivalent android. The prototype is almost complete, but this sensitive phase is the riskiest.

His bosses don't know it, but George has an ulterior motive for his work that must remain hidden. Those prototypes are his key to reuniting with his dead wife. When his prototypes escape, he has to get them back at any cost, before they ruin the entire experiment.