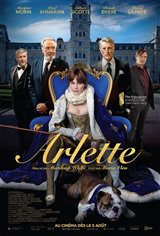 Approached by the Prime Minister of Quebec to rejuvenate the image of his government, Arlette Saint-Amour becomes, overnight, Minister of Culture. She succeeds by her look and her audacity to create a real buzz around Culture. Reckless, she does not hesitate to confront the most powerful of all: the Minister of Finance. Their files are battles to fight, but their confrontation is a real war to finish because, in the end, this film revolves around a great theme: the power of the image. Arlette takes us behind the scenes of the National Assembly, where the crazy meets the serious where comedy embraces drama.