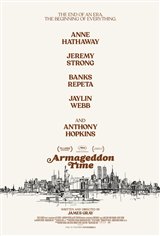 When Paul tells his parents he wants to be an artist, although his grandfather is supportive and encourages the boy, his parents want him to aim for a career that's less risky.

Paul's best friend is Johnny David (Jaylin Webb), the only Black student in his class, who's failed sixth grade and is repeating it. Johnny dreams of working for NASA, but the other students scoff at his dream. When the two boys get into trouble together during a field trip, Paul's parents decide Johnny is a bad influence and enroll Paul in a posh private school, leaving Johnny to fend on his own.